Posted on: March 8th, 2013 by Angela Oliver No Comments 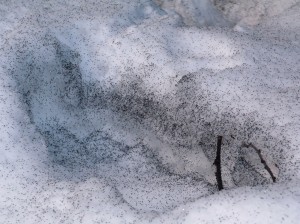 Have you ever seen snow in the late winter or early spring that looks like someone has sprinkled pepper over the top of it?  You were most likely looking at snow fleas!  Yes, they are real. Snow fleas are a type of springtail that live in the soil and leaf litter, sometimes on the surface of ponds. They are an important part of the ecosystem, feeding on decomposing matter and returning nutrients back to the soil. They are active in summer, though you would have to look hard to find them and inactive in winter.  But when the days begin to warm, the snow fleas become active again and will crawl to the top of the snow, looking for lunch.  Look closely and you will see them “hop” like fleas.  The have two tail-like protrusions from their abdomen, which they hook under themselves. When released, the insect takes a leap and appears to hop.

This photo was taken along the Dead Creek Flow trail in the Five Ponds Wilderness Area.